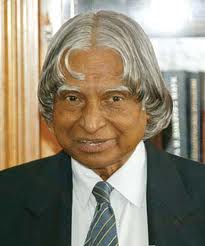 Avul Pakir Jainulabdeen Abdul Kalam (Tamil: அவுல் பகீர் ஜைனுலாப்தீன் அப்துல் கலாம்) usually referred to as A. P. J. Abdul Kalam, was the 11th President of India who served from 2002 to 2007. During his term as President, he was popularly known as the People's President.
Before his term as India's president, he worked as an aeronautical engineer with DRDO and ISRO. He is popularly known as the Missile Man of India for his work on development of ballistic missile and space rocket technology. Kalam played a pivotal organizational, technical and political role in India's Pokhran-II nuclear test in 1998, the first since the original nuclear test by India in 1974.
He is currently the chancellor of Indian Institute of Space Science and Technology, a professor at Anna University (Chennai), a visiting professor at Indian Institute of Management Ahmedabad, JSS University in Mysore, and an adjunct/visiting faculty at many other academic and research institutions across India.

let us be proud to have such a great genuis in our country......His achievment will be a motivation to present as well as future generation.
Posted by With Love Maroof at 10:19 AM

insallah will write more about other
great people

if u have any doubts about in science matter, pls ask me to my email id - vellinila78@gmail.com


and if u have time come to my blog and click the label of KELVI PATHIGAL ., u can get lot of science questions and answers

very well written.
what is the meaning of 'Maroof'?

if ihad any dout i will ask you uncle

thank you so muchhhh